What do you do when you have a semi-truck that has an over the top exterior that literally stops traffic?  You come to Columbus Car Audio & Accessories to get the interior to match!  That’s 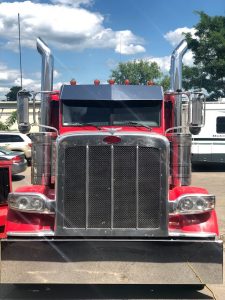 exactly what Steve Taylor of Transport for Hire did.

Steve’s original plan was for just a ‘simple install to get a little better sound’ but seeing the truck after arriving at our store, we had grander ideas to make this not your everyday build. Our own Jayson and Tyler started brainstorming ideas to and realized this truck was the perfect canvas for something truly custom. (All they needed to do was convince Steve that he wanted something more than a ‘simple install’!)

Jayson discussed with Steve how his plans would take the custom look from the outside and bring it to the inside of the semi and make it the best sounding truck he’d ever have. After some hesitation, Steve took our advice and really let us have the freedom to play and create with this install. With the budget determined and Steve on board, we started to design his one-of-a-kind custom system. 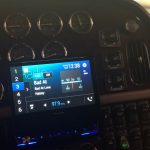 For the source unit, we used the Pioneer AVH-3300NEX, with Apple CarPlay. With this, Steve could use his iPhone for navigation and incorporate Siri directly into his dash. We also flush mounted a USB port in the console, so he’d always have a place to charge his phone while using CarPlay. 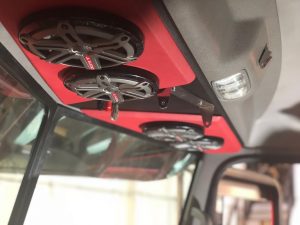 the abuse.  The factory speaker locations were made for little 4×6” speakers, and we were unable to use them for the new larger speakers. Tyler decided to cut two pair of the M650’s into the bottom side of the overhead console.  The console was wide open so there were no real setbacks to that, it was just a little time consuming.  Tyler remade the underside of the console using two layers of MDF, he wrapped the bottom layer in black vinyl, and the top layer in red.  Both layers were routed out around the edges so that they would have a nice finished look to it that would flow with the factory overhead console.  Tyler also installed RGB lighting from Racesport inc. behind the tweeter of each of the JL Audio speakers, which are controlled with a Bluetooth module. Once Tyler made the panel and had the speakers mounted in the overhead area, we knew that it was going to be in your face loud, so we had to come up with something that would keep up for the rears. 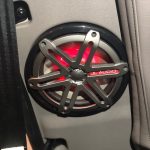 For the rear speakers, we chose to install JL Audio M770-CCX-SG-TB for the B pillars. To do that, Tyler had to open up the factory locations to house the new 770’s. That was easier said than done just because of the depth that the new speakers have, and the spot we chose to install them. Even though the 770’s are loud we knew that they would not keep up with the two pair of 6.5’s in the front.  Especially since they are so low compared to the fronts and blocked by the seats. So, we decided to install a pair of JL Audio M880-CCX-SG-TB in the sleeper area so that if he is parked and sitting in the sleeper area he would still have an amazing sound.  Again, easier said than done; the stock rear speaker was also a 4×6” opening, and there was no depth. Tyler built new panels out of MDF and wrapped them in red vinyl.  As with the rest of the speakers, Tyler installed Racesport RGB lights behind the tweeters and he lit up the overhead storage area in the rear with RGB strips hidden inside the pockets.  The panels were tough to do because of how big the new speakers were going to be in comparison to how small the factory speakers were.  The final panel was on the 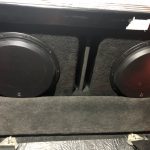 larger side but flowed nicely with the rest of the truck.

Now that the speakers were installed we needed to move to the subwoofers.  We knew we wanted it loud and that slot ported would be the best way to go.  We thought there was plenty of space but once Tyler started measuring and calculating air space, he soon realized that it would not be as easy as he thought.  We chose to use a pair of JL Audio 12W6V3-D4 12” woofers.  With the airspace he had it was going to be a tight squeeze, plus we had to raise up the box to fit the 12’s, because the floor was higher in the cab than in the sleeping area which is where the box was installed.  We also incorporated the amplifiers into the face of 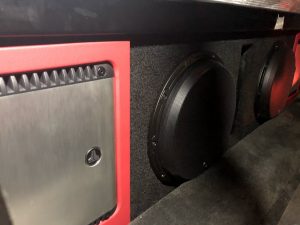 the subwoofer enclosure.  We chose to use a pair of the JL Audio HD900/5V2 amplifiers to run everything.  We used these amps because they have the regulated intelligent power supply. With that technology we were able to get plenty of power to each subwoofer, and all the M Series speakers in the vehicle.  We wired one HD900/5 for the left side and one for the right side.  Originally, we were going to use the new JL Audio VXI amplifiers, but Jayson was afraid that they would not have enough power to really give Steve what he was looking for in the bottom end.  The amplifiers were flushed into the face and wrapped in red vinyl to match the red accent panels Tyler created throughout the semi.  He also installed RGB lights around the amplifiers to really make the interior a cohesive design.

Since Steve spends so much time on the road we also had to give him some entertainment in the sleeper area.  Tyler mounted a 32” Samsung LCD television and installed an Xbox One so that he could play video games, watch a DVD or even Stream Netflix.  The hard part about this was making sure that the television would not come loose or fall while driving, so we installed a fixed television mount on the passenger side wall of the semi. Then Tyler had to get creative to install the Xbox one system.  He fabricated brackets out of MDF, and black carpet, and mounted it to the wall utilizing factory bolt locations.  He made the Xbox one removable in case Steve would ever like to take it out. 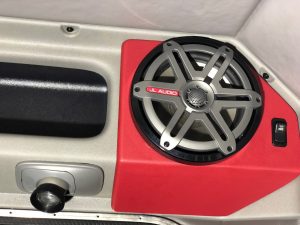 Everything turned out great in the end, but there were a lot of challenges that came about through the installation process.  The biggest obstacle was running all the wiring and coming up with bigger speaker locations while still making it seem like a factory install.  It didn’t seem like it would be a big deal in the beginning but then Tyler realized that there was not much room to incorporate larger speakers, extra speakers, and hide the wiring behind panels like he does in cars.  With a lot of creativity, he was able to come up with a truly amazing installation that appears as if it came from Peterbilt and route the wires in a way that you could not tell there was anything done, and the outcome was AMAZING!!! Tyler did an amazing job with this and really took the time to incorporate the red vinyl accent panels and the RGB lighting throughout the interior, giving it subtle accents that really make it one of a kind. 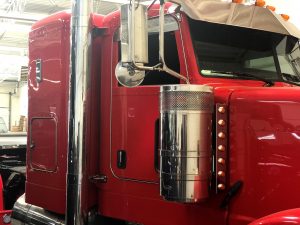 The best part of the build was getting to show our client his baby.  His mouth dropped and an ear to ear grin appeared as he played through a variety of his favorite songs. That was exactly what we were waiting to see, this was his distinct sign of approval!  He loves this truck and was excited to get back on the road and experiment with the new products.  It was such an amazing project and Columbus Car Audio & Accessories was proud to be a part of this build and are excited to start the next project for Steve and his team at Transport for Hire.  He is already in the process of finishing up a new build to drop off to us.