Alpine Electronics announced it has added a new model with compatibility to Apple CarPlay. The i109-WRA 9-inch Restyle dash system with Apple CarPlay debuted at the 2016 International CES. 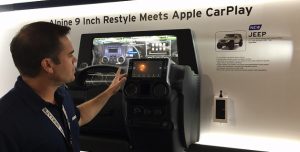 i109-WRA 9-Inch Restyle Dash System for Jeep Wrangler
The i109-WRA is Alpine’s first model to offer Apple CarPlay compatibility in the 9-inch screen platform and is the largest system in the aftermarket to feature Apple CarPlay support. It brings Apple CarPlay and a 9-inch screen to the Jeep Wrangler, both of which are not available factory options. It is compatible with the Jeep Wrangler (2011-up) and has a WVGA screen with 800×400 display resolution. The i109-WRA comes with a dash bezel that replaces the entire OEM radio area to create a factory-like look and a vehicle specific wiring harness for plug and play installation. Dedicated hard keys provide direct access to phone, music and maps from the iPhone. To further appeal to the Jeep Wrangler driver, the i109-WRA has an opening screen and graphical user interface (GUI) that feature Wrangler-inspired styling.

Alpine says that most Silverado, Jeep Wrangler and Sierra truck owners are iPhone rather than Android users, so it is not including Android Auto on it’s initial offerings, although Android Auto is on the company’s roadmap for the future.